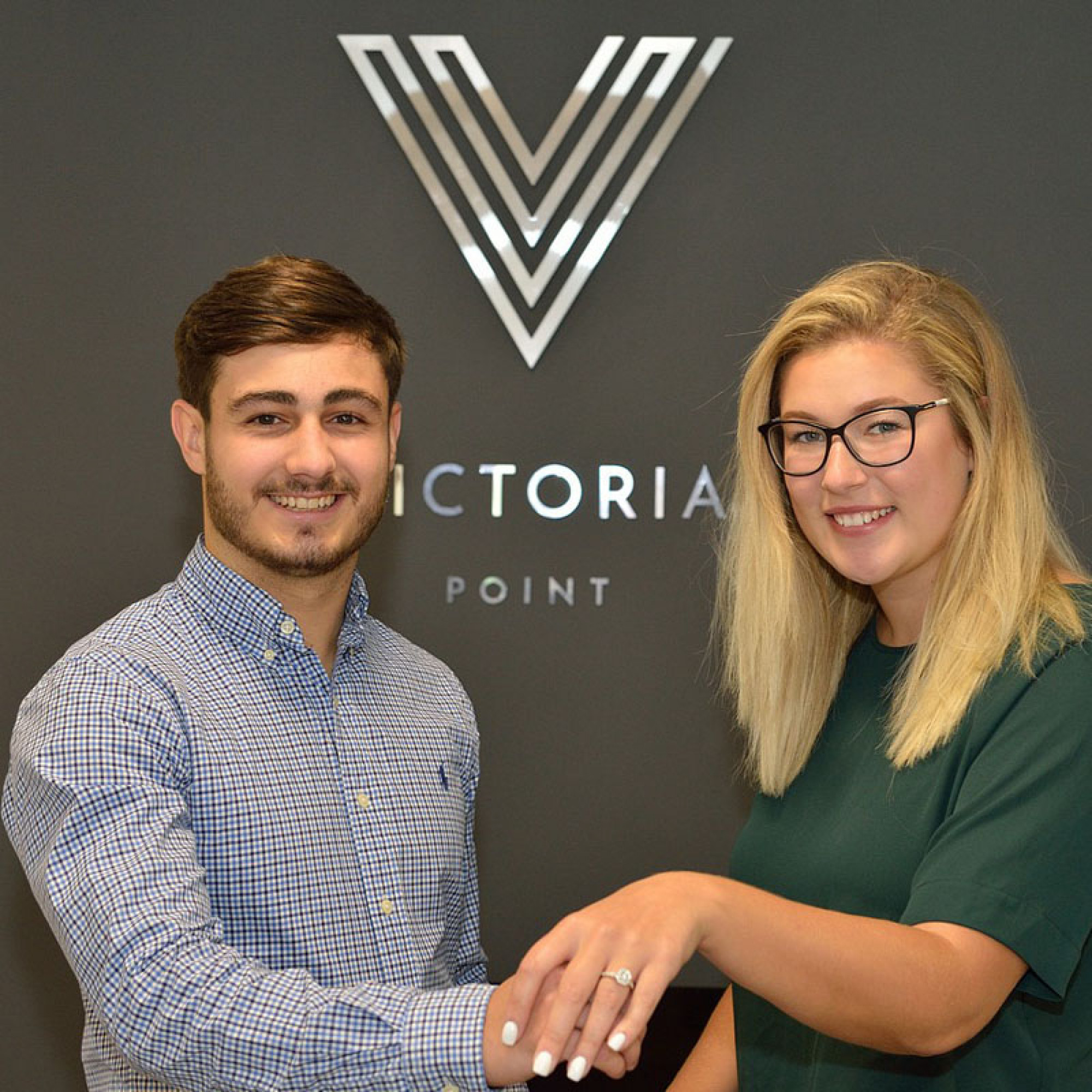 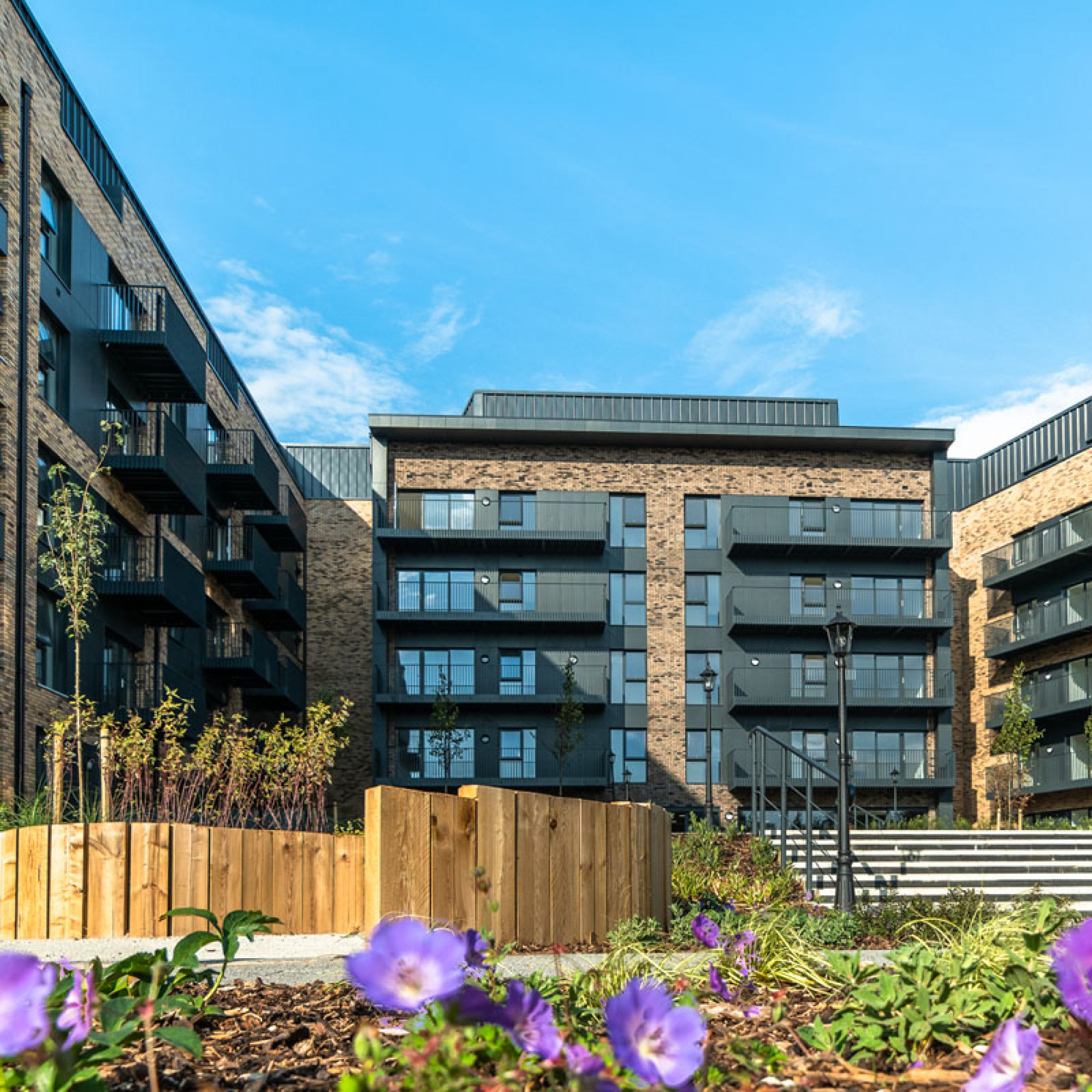 A celebration at Victoria Point, Ashford

Jack and Megan said 'yes' to Victoria Point and 'yes' to a new year wedding!

When Jack Weaver and Megan Winfield called into the new luxury Victoria Point development in Ashford to check on the progress of their first property purchase together, little did Megan realise that Jack had another deal to seal.

He had told Megan it would be a good chance to oversee the finishing touches to their two-bedroom, two bathroom apartment they plan to move into in late October.

Then to the delight of Savills sales negotiator Pete Cronin, who was in on the secret, Jack dropped down on one knee and proposed to Megan.

They celebrated with a romantic dinner that evening, while planning their big day next year.

Jack, aged, 22, who works in financial services in Folkestone, and Megan, aged 21, a teaching assistant in Ashford, have been going out together for four years and had been planning to set up home together for some time.

Jack said: “We had been looking around the Ashford area and wanted a two-bedroom property, but everything we saw, whether a house or an apartment, was much smaller than we wanted, or needed work.

“Then we made an appointment to look at Victoria Point and we were instantly impressed with the development. We were offered a great selection of apartments before deciding on the two-bedroom apartment we have chosen to be our home.”

Their two-bedroom apartment, which was on the market for £240,000, has two en-suite bathrooms, plus a WC, and they will also have access to Victoria Point’s Super Lounge and the designer gardens and outside space.

Jack added: “The price, the size, the location and the facilities were just what we wanted and when we visited on Saturday it was the first time we had seen the communal areas and the garden. It all looks really good and it is nice to see it has turned out just like the brochure depicted!”

He said another major factor in the decision to purchase at Victoria Point was the way in which Ashford is developing.

“Ashford Designer Outlet is amazing and there is so much happening around the area, in particular close to Victoria Point.”

His job in Folkestone is just 15 minutes on the train from Ashford International.

David Hofton, sales and marketing director of Elevate Property Group who are developing the 216 apartments at Victoria Point, said they were delighted for the happy couple.

“This is our first marriage proposal at Victoria Point and I hope there will be many more!” he said.

“We have seen a surge in reservations recently since lockdown eased and more than 140 – 65% - of the 216 apartments are now sold.”

Mr Hofton added that Victoria Point was proving popular with a wide range of buyers, from first tie buyers like Jack and Megan, to downsizers and investors.

“Lockdown put outside space firmly in the spotlight plus the fact that many people will be working from home for the foreseeable future. Owners at Victoria Point can choose to work in their apartment or use the communal space of the Super Lounge and the outside areas, when weather permits.
“Victoria Point really is ideal for a flexible working lifestyle.”

Victoria Point offers a range of studios, one, two and three-bedroom apartments with prices currently ranging from £142,500 to £355,000. Buyers have the benefit of a concierge service, a superb residents’ lounge, extensive landscaped gardens and parking.

Mr Hofton added that interest in Victoria Point is also being driven by the news that planners have given the go-ahead for a £250 million film studio complex which could create more than 2,000 full-time jobs. The studios, with Netflix and Amazon already showing interest in the facilities, will be located on the disused Newtown rail works close to the Designer Outlet.

For further information, call Savills on 0845 155 1101, email victoriapoint@savills.com or view the development at https://www.elevatepropertygroup.co.uk/residential/victoria-point