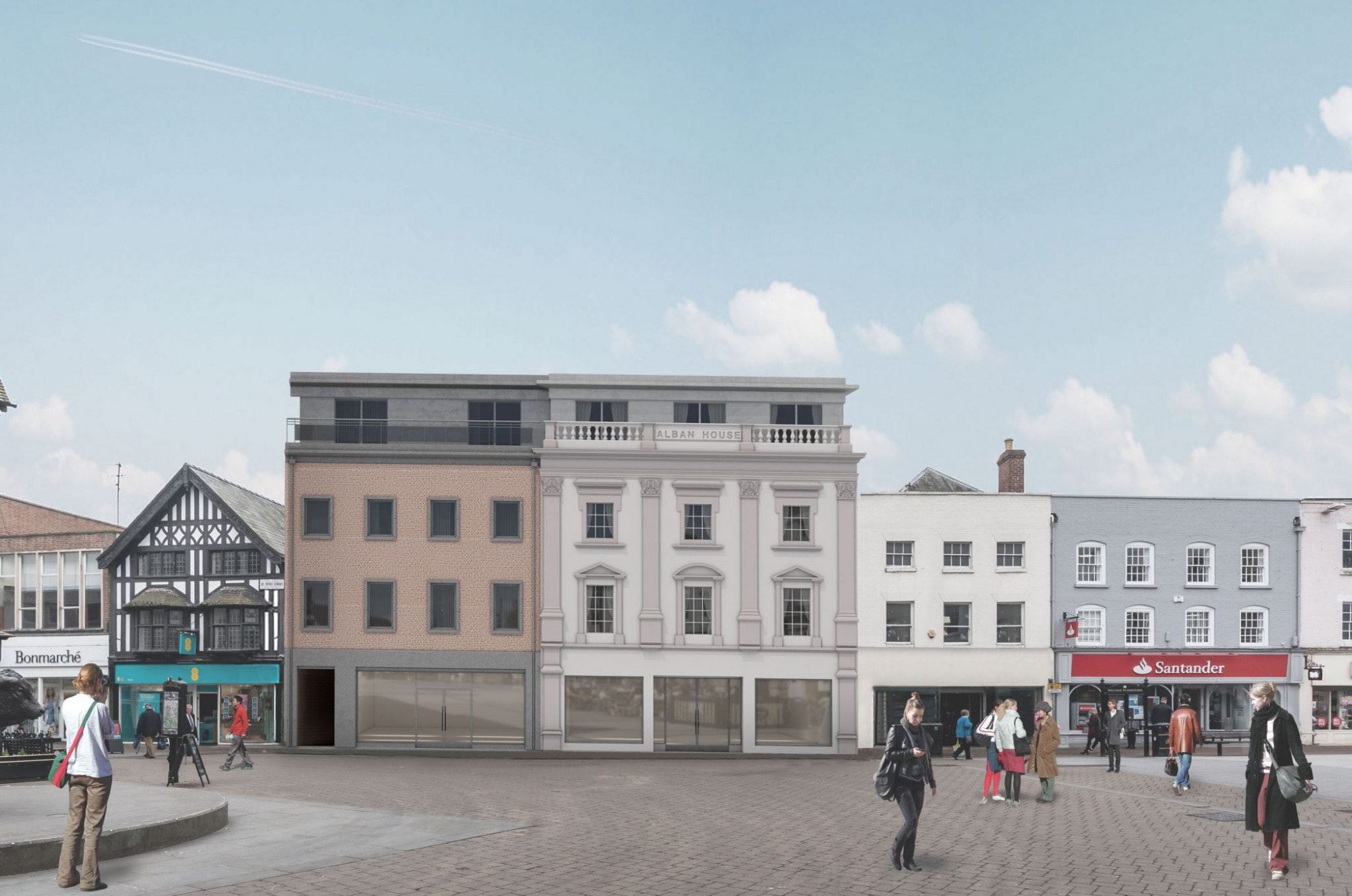 When fire took hold and tore through two landmark Grade II listed buildings in Hereford’s High Town area, on Thursday 21 October 2010, it left a site that has lain derelict for over six years.

Now a Birmingham-based property developer is planning to bring 16-18 High Town back to life as a mixed-use development incorporating residential and retail accommodation.
The site has the benefit of conditional planning consent however Elevate Property Group will shortly be submitting more detailed plans to Herefordshire Council and if all goes to plan the intention being that work could start on the development as early as this summer.
The original buildings, which were gutted by the fire that required more than 100 firefighters to bring it under control, have stood empty since October 2010. They have their origins in the 15th and 16th century but also had 18th and 20th century additions.
Over the last six years attempts to re-develop the site have been blighted for various reasons including previous owners failing to start restoration work, enforcement notices, owners going into administration and preservation concerns.
With the purchase of the site by Elevate Property Group, a bold scheme is now in preparation that will breathe life back into the heart of High Town.
The only factor to be resolved is a sufficient power supply to the area. When the fire gutted the site, an electricity sub-station that supplied that area of Hereford was removed.
Existing power provision in the area is insufficient and the Council is currently pressing Western Power Distribution to agree an early solution and the provision of a sub-station to complete the proposed package.
Elevate Property Group managing director Steve Dodd said: “Our detailed application currently being prepared by local architects Hook Mason will include the construction of two Zone A retail units and a combination of 20 apartments, penthouses and townhouses with associated parking.
“The project will be managed and overseen by our development managers BACE Construction Consultants.”
The breakthrough in the six year saga came with an historical appraisal produced by Philip Belchere of Hereford architects Hook Mason Ltd.
In a report first produced in October 2015 and revised in May 2016, he secured agreement with Historic England that, in effect, the damage was too serious to warrant insisting on extensive retention of the existing fabric of the buildings.
He wrote: “16-18 High Town have undergone significant alterations and adaptations since their original medieval construction with much of the fabric having been re-used from elsewhere.
He added that “the historic relevance of most of the remaining structures is lost and retention or reintegration is of limited significance”.
“The proposals are to re-use limited original structure agreed with Historic England, within the footprint of the design and fundamentally clear the site for redevelopment.
“The retention of the Alban House frontage is a flawed concept and…a pragmatic approach of replication is favoured by the development team and is recommended to the authority,” he said.
The project is Elevate Property Group’s first in the cathedral city and will be welcomed both by homeseekers searching for a city lifestyle in the heart of Hereford and by retailers.
It will also breathe life back into what has been an eyesore in High Town for many years and the subject of continuous speculation over the future of the site.
Elevate MD Steve Dodd said: “Many saw a problem. We see an opportunity and we are delighted to have secured this site, we plan to use a local contractor to complete the works on our behalf”.
“We believe the scheme we will be proposing addresses local concerns and combines an attractive blend of old and new in a part new build, part restoration project.”
Elevate has a tremendous track record in tackling renovation and refurbishment projects, especially in city centres. In the past two years, it has completed four such projects in Birmingham city centre now including some of the city’s most desirable homes.
Other projects include homes in Malvern, where the sympathetic yet contemporary conversion of the former Holywell chapel and music rooms in which Edward Elgar played and taught were rightly acclaimed as well as Well House school.
The scheme for Alban House proposes apartments ranging from 1 bed starters homes to 2 bedroom penthouses with roof terraces, and courtyard townhouses to the rear, prices are yet to be determined.
Steve Dodd added: “We are committed to bringing back to life a very valued and much cherished part of Hereford and we look forward to working with the planning department and local organisations to deliver a project that is long overdue.