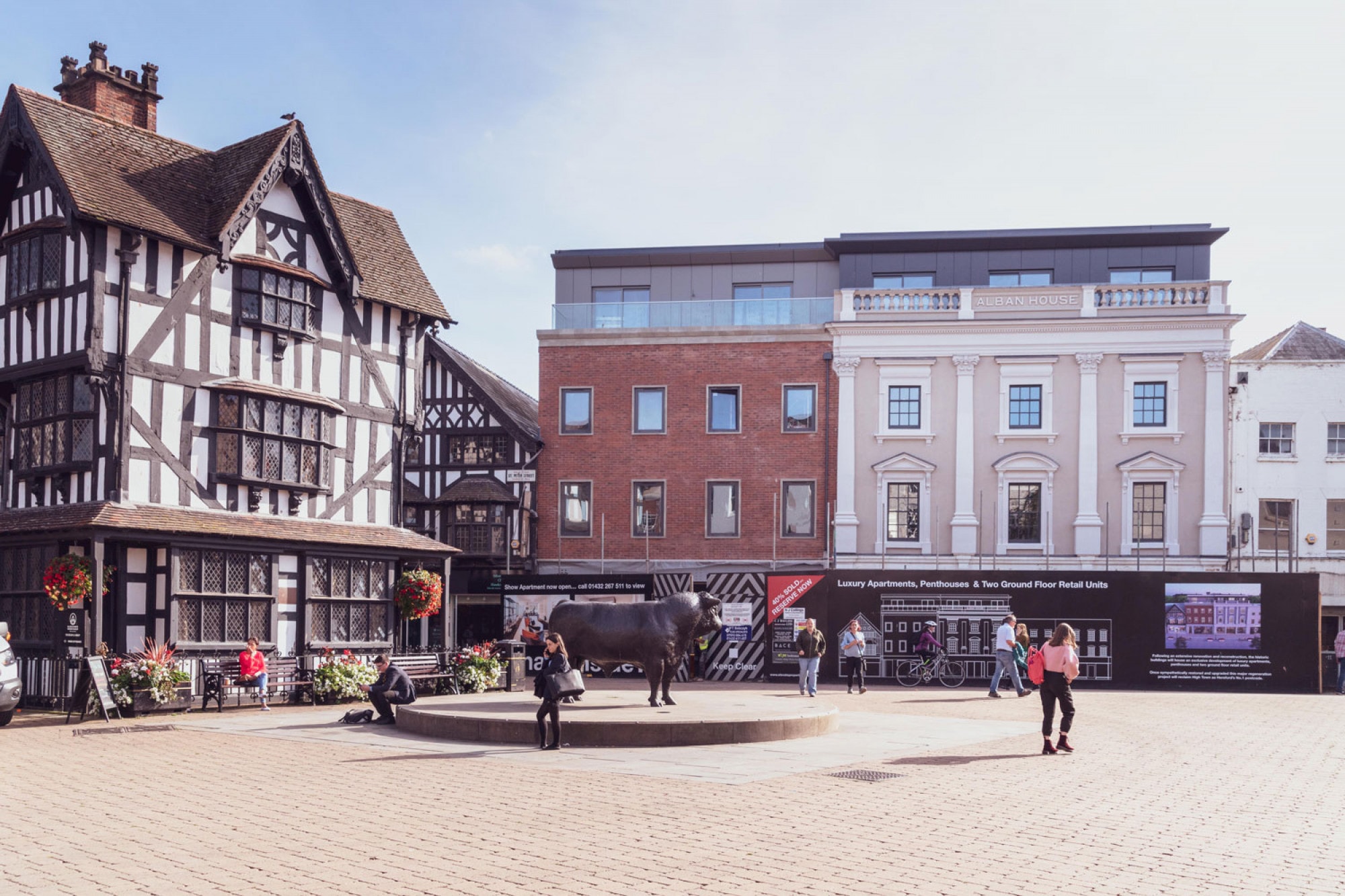 The leader of Herefordshire Council has praised the tenacity of developers Elevate Property Group who this week unveiled their redevelopment of an eyesore site in Hereford’s High Town.

The scaffolding has finally come down at Alban House to reveal the restoration of the two Grade II listed buildings at 16-18 High Town which were devasted by a major fire on Thursday 21 October 2010.

The derelict site was finally acquired by Elevate Property Group in 2017 and the company set about working with Herefordshire planners to bring what remained of the buildings back to life.

Cllr David Hitchiner, Leader of Herefordshire Council, said: “This is an excellent example of the public and private sector pulling together to solve a problem that had dragged on for many years.

“The project recognises that while the demand for city centre retail space appears to be in decline, individuals are keen to live in city centres.  We welcome developments such as this which combine retail and residential and which will help to revitalise and rejuvenate the city centre.

“Elevate Property Group are to be commended for stepping into the breach and working with us to find solutions to the many problems that beset this site.

“It was only by close cooperation that we were able to agree a way forward and full planning permission was finally granted in 2017.

“We are also pleased that Elevate Property Group chose to work with local professionals and builders to deliver this project, thus creating and supporting Hereford jobs.”

Even then construction work was delayed when Saxon ramparts were discovered and the developers stepped back to allow county archaeologists to chronicle details of the Saxon discovery dating back to late 9th century AD.

The breakthrough in the six year saga up to 2016 came with an historical appraisal produced by Philip Belchere of Hereford architects Hook Mason Ltd.
“Elevate Property Group are to be commended for stepping into the breach and working with us to find solutions to the many problems that beset this site.
In a report first produced in October 2015 and revised in May 2016, he secured agreement with Historic England that, in effect, the damage was too serious to warrant insisting on extensive retention of the existing fabric of the buildings.

C J Bayliss of Hereford were then appointed as main contractors to build the project.

Now the High Town frontage is restored to a pristine condition and the £7 million development houses 18 penthouses, apartments and townhouses. Already seven of the 18 new homes have been snapped up off plan, with two of the three top floor penthouses already reserved.

When completed later this year, Alban House will be fronted by two commercial units with a newly-created range of luxury homes, above and behind, many with balconies. The gated courtyard accessed from East Street to the rear will also provide the availability of parking.

Steve Dodd, managing director of Elevate Property Group, said: “Alban House has been one of the most technically demanding and ultimately one of the most satisfying projects we have undertaken and we are extremely grateful to  Herefordshire Council for the understanding and cooperation they have shown us with what has been a difficult project to deliver.

“Now, when we can also see for ourselves what has been achieved, we are really pleased to have been able to bring this part of historic Hereford back to life.”

David Hofton, sales and marketing director of Elevate Property Group, said: “Completion is scheduled for the end of 2019 so we hope to have all our new residents in by Christmas.

“Help to Buy has been confirmed and this has further enhanced the attraction of Alban House to first time buyers. Among the 11 remaining homes, there are three one bedroom apartments with prices ranging from £135,000 to £160,000.

“We are very proud of what Elevate Property Group and our development partners have created at Alban House, bringing a luxury finish and specification to Hereford that has not been seen before.”